There is no shortage of stories about start-ups building for too long, delaying their launch, missing windows of opportunity, or running out of cash too early. When building products, it’s tempting to always want to add one more feature… one more teeny-tiny addition; one more sprint of work. With no exception, the story always goes like this:

Someone important: Let’s also pack in feature X before launch, I think customers really need this.

🔥 One sprint goes by

Development team: This new feature created some dependancies and some extensive testing is required. We need more time.

Some important bozo: I was just thinking last week, now that we have X, couldn’t we also allow users to customise this and that? It’s a natural product addition that they would surely appreciate.
Design: This is not something we’re prepared for. We have no designs. We don’t even know if people need it.
Same important bozo: It doesn’t seem like a big thing to me, it won’t take you long. Let’s do it!

It’s now six weeks later and you still have no paying customers; you still haven’t had one single person use your product and validate your choices. You’re still shooting in the dark, and you’re doing it while paying for an expensive product team, holding all marketing efforts back, and pissing off whoever’s paying for all of this charade.

Surviving the “One More Thing” Pandemic

Do this exercise with me. I promise it’s only going to take a few seconds. Sit down, free of distractions, and close your eyes. Try to clear your head of today’s problems. And then repeat after me: the goal is to launch as fast as humanly possible. Now do it twice more. And once again, for good measure. Do this every morning. Instil this mentality in your team, and you’ll find yourself ahead of most other companies.

This is important. ‘Follow it or crash and burn in flames‘-kind of important, not ‘What will I have for dinner‘-important. Because as much as we think we know what customers want, we don’t. Even if we do know, we’ve got no clue as to how they want it. And even if we can make an educated guess, we still can’t be sure the timing of our product is good. The only way to find out is to launch, learn from customers, and iterate using what you’ve learned. 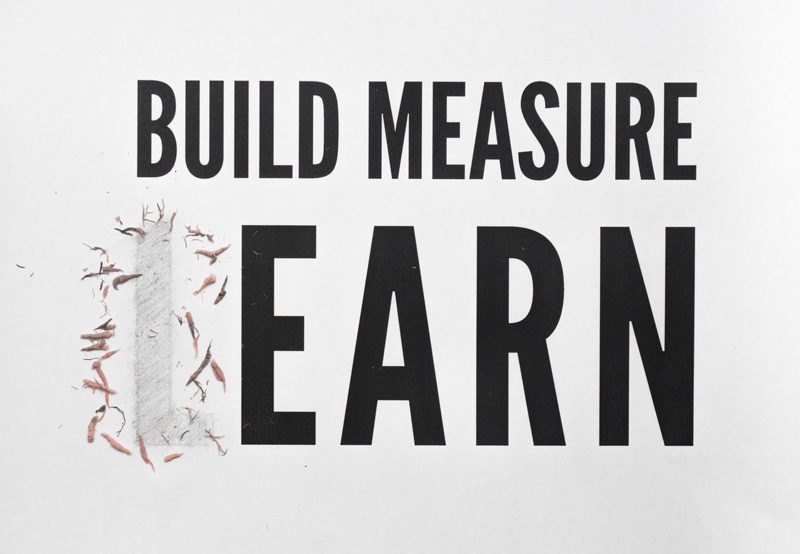 Making money is not possible without launching first.

Every company I’ve ever worked with has been prone to get infected with the “one more thing” virus. After you add this and that, you might as well work on the next little improvement. The cycle never ends. You can optimise endlessly, going through countless revisions and brainstorming ideas, stretching your calendar for months on end. And when we do that, what don’t we do? We don’t launch.

I do understand the pursuit of excellence and unwillingness to release half-baked work. As a designer, I have to fight that urge daily. But the goal is not to be perfect; that’s not attainable. The goal is to inch closer to being profitable, which you do by having a product live and by iterating on it.

It’s time to get lean

The defacto framework successful start-ups use to grow is the lean approach championed by Eric Ries. It’s all about running many small experiments to mitigate the risk of starting up, rather than betting everything on a single horse. And make no mistake – even if the potential customers you’ve talked to seemed excited about your business and you think you know how they’re going to respond, you still have no certainty that your idea is any good. Until someone pays for your product, you can’t use their opinions and off-the-cuff thoughts as validation.

Most founders spend months (and loads of money) to launch products in a software industry known for high rates of failure. Since you’re already playing a game that’s rigged against you, isn’t it nuts to just dive head straight in with no mechanism to protect you and your finances?

If your product has such a high chance of failure, wouldn’t you rather find out as soon as possible, so you can change course? Most experienced founders know that pushing for more features doesn’t help. In fact, any time spent building features that are not absolutely necessary decreases your chance of success.

What’s there to do?

The reality of start-ups is that you’re running a race against time, competitors, and uncertainty. Remember our little mindfulness moment earlier – your goal is to launch as fast as humanly possible.

If you’d need to travel across the city to a job interview, I would hope you’d plan the trip. Do I take the car or the subway? Would I have time to buy lunch on the way? Do I have a minute to spare to window shop? Can I stop at the stadium to buy tickets for the game later? NO. NO. And NO. You’re in a hurry to get to your interview. Get there as fast as possible, route one, no delays. It’s common sense.

We need to apply that same common sense to our MVPs. We need to sit down and plan. What’s absolutely fundamental, what’s a nice-to-have that can wait, and what’s something you should not be working on until you’ve got paying customers? Once you’ve made that list, don’t deviate from it. It will be tempting to add “one more thing”, but each addition is an extra stop on the way to your job interview. Is losing focus on the end goal a risk worth taking?

The only certainty you’ll ever get when launching a product is when people get to use it. Once your idea has been validated (or not!), you can decide the next steps.

Just enough to make it.